If you like this recipe come back on www.happystove.com and rate it! 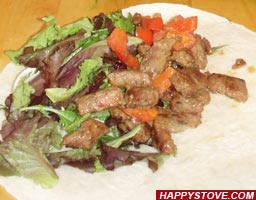 Turkey, Cranberry and Radicchio Wraps is an original idea for an all American Burrito style sandwich. Delicious and tangy a must try recipe. Submitted by Ben K.

To browse other recipes using that ingredient click on the

Form the ground turkey into paddies and start to cook like a hamburger in a large skillet.

When the paddies have browned on the outside but still pink on the inside, use a spatula to chop the paddies into bite-sized pieces. If there seems to be an excessive amount of fat, drain some off, and then add the olive oil and red bell pepper.

When the turkey is fully brown and the bell pepper has begun to soften, reduce heat and add the pecans and cranberries.

Cook for a few moments, allowing the turkey fat and olive oil to plump the dried cranberries. Shake the skillet frequently to prevent the cranberries from becoming crisp.

Remove the skillet from heat.

Most food retailers sell bags of leafy vegetables that include radicchio as well as premixed bags of pecans and cranberries.

Turkey, Cranberry and Radicchio Wraps is tagged as:

An original mix of flavors in this chicken with coffee sauce recipe. The spicy habanero flavor and the coffee are paired in a perfect and yummy match. Great with a side of steamed rice.

Tuna and Capers Deviled Eggs is an easy and quick recipe for hard boiled eggs filled with mayonnaise, tuna and capers. Perfect as appetizer, side dish or main course for a party or holiday dinner.

From a classic of the Italian cuisine, eggs and your favorite choice of bacon in this delicious pasta recipe. Pasta alla Carbonara will become one of your favorite main courses. 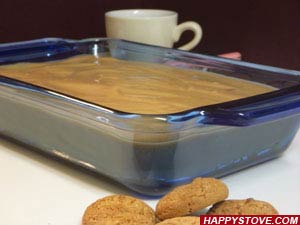 Macaroons (Amaretti) Tiramisu is a yummy and easy variation of the traditional tiramisu recipe.... 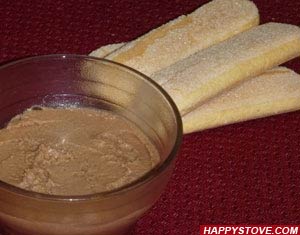 Cream of Mascarpone Cheese and Chocolate

Cream of Mascarpone Cheese and Chocolate is a surprisingly easy dessert. Perfect for your last... 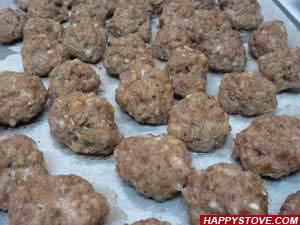 Ever thought on how easy and quick is to make your own Oven Baked Italian Meatballs? With this...